Solar energy is a very simple energy type produced by the sun and can be stored everywhere. For a functional energy generator that depends on the nature of solar energy, two different pieces are needed. These are collectors and stores. The collector simply collects the incoming radiation and converts it into a different form of energy (electricity and heat or just heat). The storage unit is necessary due to the unstable nature of solar energy, and sometimes very little energy is generated. For example in the evening or in heavy cloudy weather the energy generated in the collector is very low. The storage unit can retain excess energy during peak production periods and leave it when production stops. Like batteries in a battery, batteries in solar panels are designed to generate electricity, but in the case of batteries, electricity is produced from chemicals. In solar panel batteries, electricity is produced from sunlight instead of chemicals.

The solar cell is made up of two different layers of silicon treated or doped so that they can pass electrons. The substrate is doped, called p type or positive type silicon. The top layer is doped on the reverse side and is usually ITO. This is called n-type or negative type silicon. When we place n type silicon on P type silicon, there is a barrier in the joint of two materials. Electrons can not pass through the barrier, and when we connect this silicon sandwich to the light, no current flows and no light is emitted. But if we connect the burning light, some things can be noticed. Since the photons enter, they give energy to the atoms in the silicon. The receiving energy excites the electrons from the low p-type layer so that the electrons bypass the barrier and pass over the n-type layer, thus wandering through the circuit. More rays radiate, more electrons jump and more current passes. The operating principle of the solar battery is also shown in the figure.

1-The photons are carried by the carriers of the ITO and the energy is transmitted across the battery.
2-Electrons use this energy to pass through the barriers to pass into the n-type layer and escape from the circuit
3-Photons top bombs when the sunlight illuminates the battery.
4-The photons give their energy to electrons in the lower p-type layer.
5-It flows through the circuit and the electrons light up. 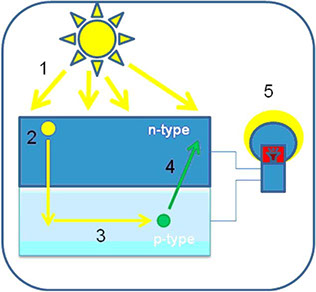